A reasonably warm sunny day prompted me out into the garden to see what was going on out there. It's also RSPB birdwatch day, so me and Himself spent an hour this morning peering out of the window and counting the visiting birds.

We counted 9 species in all including plenty of starlings and house sparrows, a blackbird, some wood pigeons as always, a great tit, a coal tit, a robin, a magpie and a pied wagtail.
The was no sign of the usual blue tits. A little bird must have told them we were counting.

But I did spot two penguins, our very own Monty and Mabel that arrived at Christmas....

Also a new addition since Christmas is Himself's weather station. This tells us what the temperature is inside and outside the house, the wind speed and direction, humidity and rainfall, and what the conditions are likely to be for the next few hours. The readout is inside the house so you don't have to go out in the cold to get the readings. Our next door neighbour was a bit alarmed when she first noticed it, but we have assured her it is not a spying device or an alien artifact and she appears comforted by that information.

A toddle to the end of the garden informed me that the birds had, indeed, made use of the nesting pouches we put up last year in the holly tree. Unfortunately they didn't use them to nest in but pulled out the straw to build their own nests instead. The wooden bird house remains uninhabited so far, although we have aligned it as advised on the RSPB site. Ditto the bat boxes. I was given an insect hotel for my birthday, so will be putting that up in the spring to see if it encourages any useful pollinators to move in.


The white tailed bees that used to nest under the garden shed didn't come back last year after the awful wet summer we had the year before and I am wondering if that was the reason we had so few apples on the tree last autumn. Honestly, hardly enough to make a decent pie once the wasps and insects had their share. Hopefully this year willl be better.
Posted by judeparsons at 10:02 No comments:

We had our first smattering of snow this winter in January in the West Country. 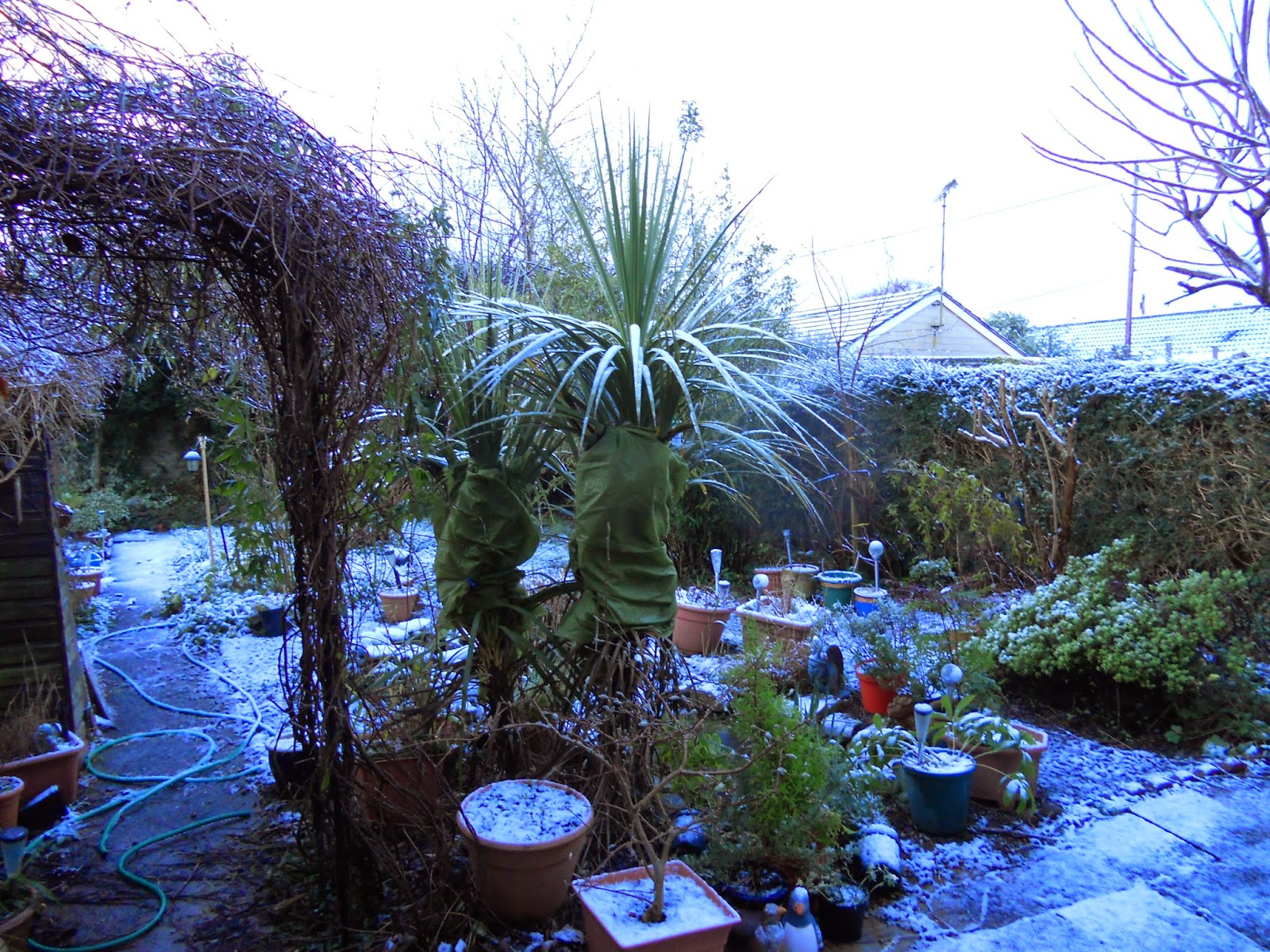 The garden looks so different in the winter when all the exotics are tucked up cosily in their fleece blankets and the perennials and shrubs cut back. The buddleia in front of the hedge on the right has been half cut down but needs to have the old branches removed in the spring. Several of the climbers also need a firm cutting back this year. The pink clematis montana over the shed went berserk last year, as did the virginia creeper and the chocolate vine (akebia quinata) which you can see over the arch. 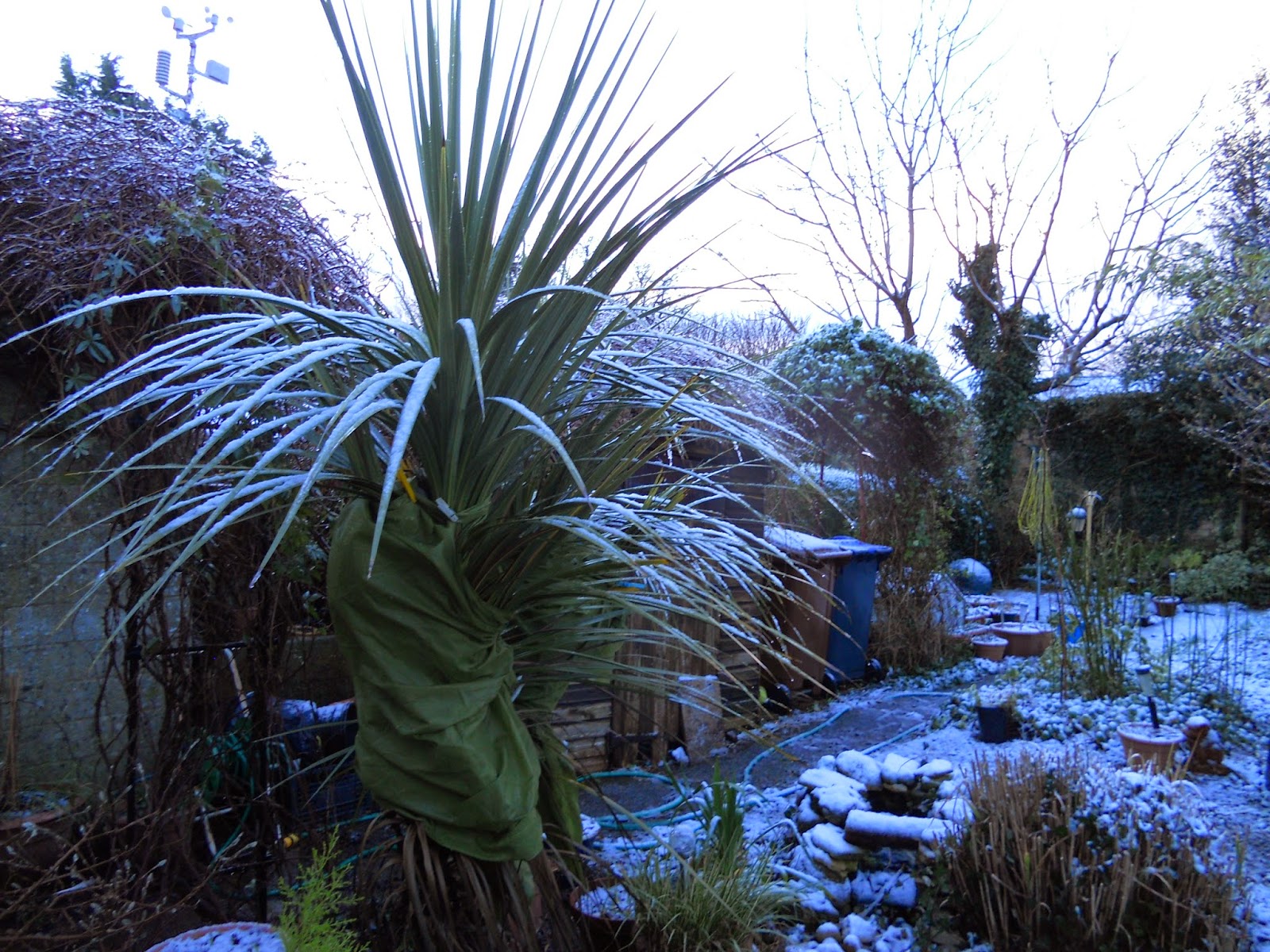 Most of the exotics are by the wall of the house safe from the worst of the weather but the cordylines are planted in the ground and can't be moved so they have their own fleece blankets around them held on with clothes pegs so I can pull the fleece over the crowns and between the leaves as the crowns are the part where new growth starts and so are the most tender parts of the plant.These two grew back from the stump of the original cordyline which was fatally damaged in a severe winter a couple of years ago. 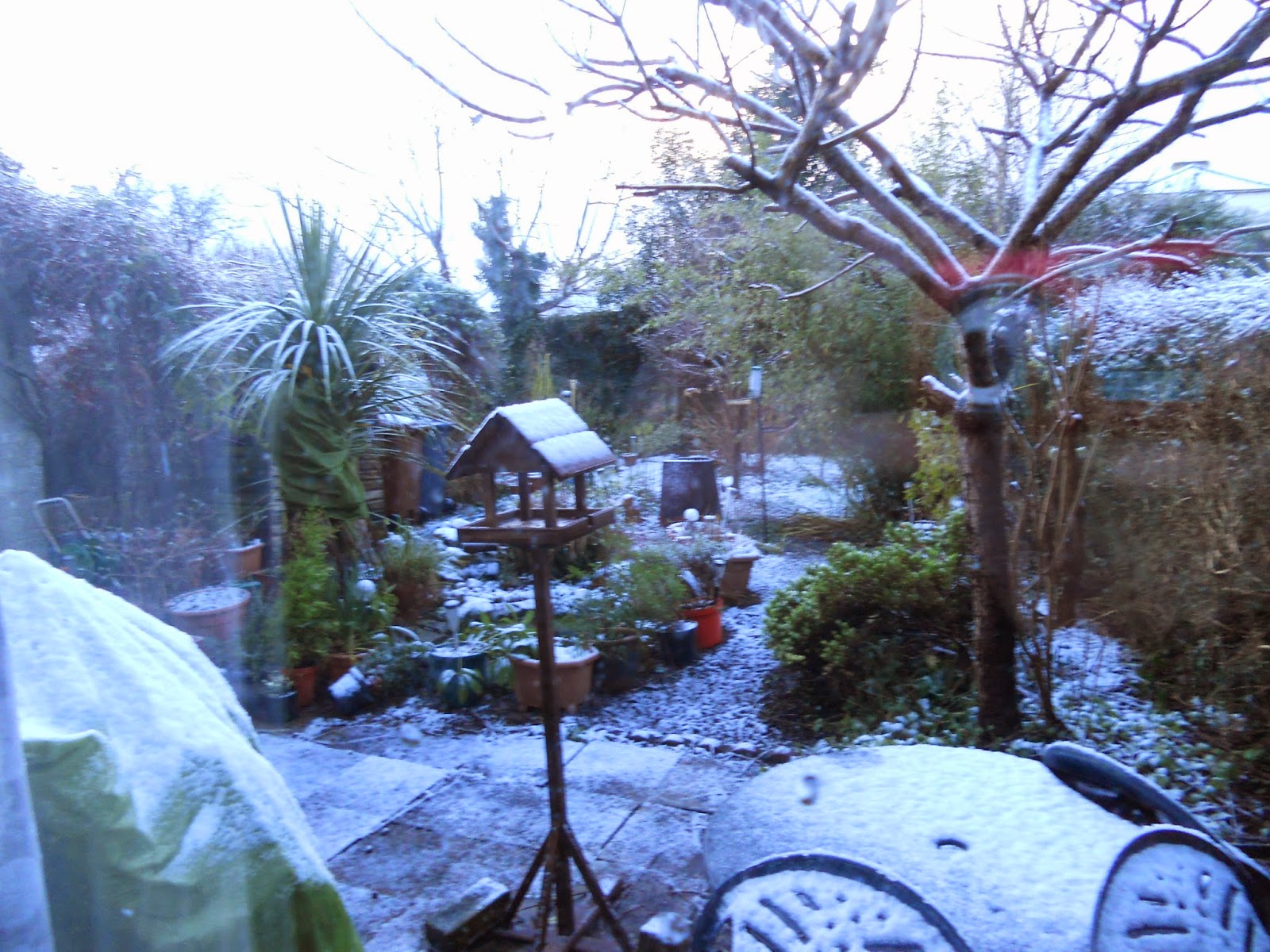 We have a new bird house, and the smaller birds are now getting their share of food whilst the pigeons sit on top of the feeder looking confused. There is food for them elsewhere in the garden though and we seem to have two robins as well as the usual starlings, sparrows, blackbirds and various tits who come to get their home made muesli of mealworms, seeds and fat pellets provided daily by Himself along with the occasional offering of bread. Organic of course!


How empty the garden looks! I am looking forward to the crocuses and snowdrops to break the monotony and add sparkles of colour to the garden.
Posted by judeparsons at 06:52 No comments:

Fred the frog has been evicted from his blue box at the top of the garden and gone to live in the pond with his fellow amphibians. I felt it was neccessary to address his social exclusion and hope he will find the new accomodation more roomy and interesting. 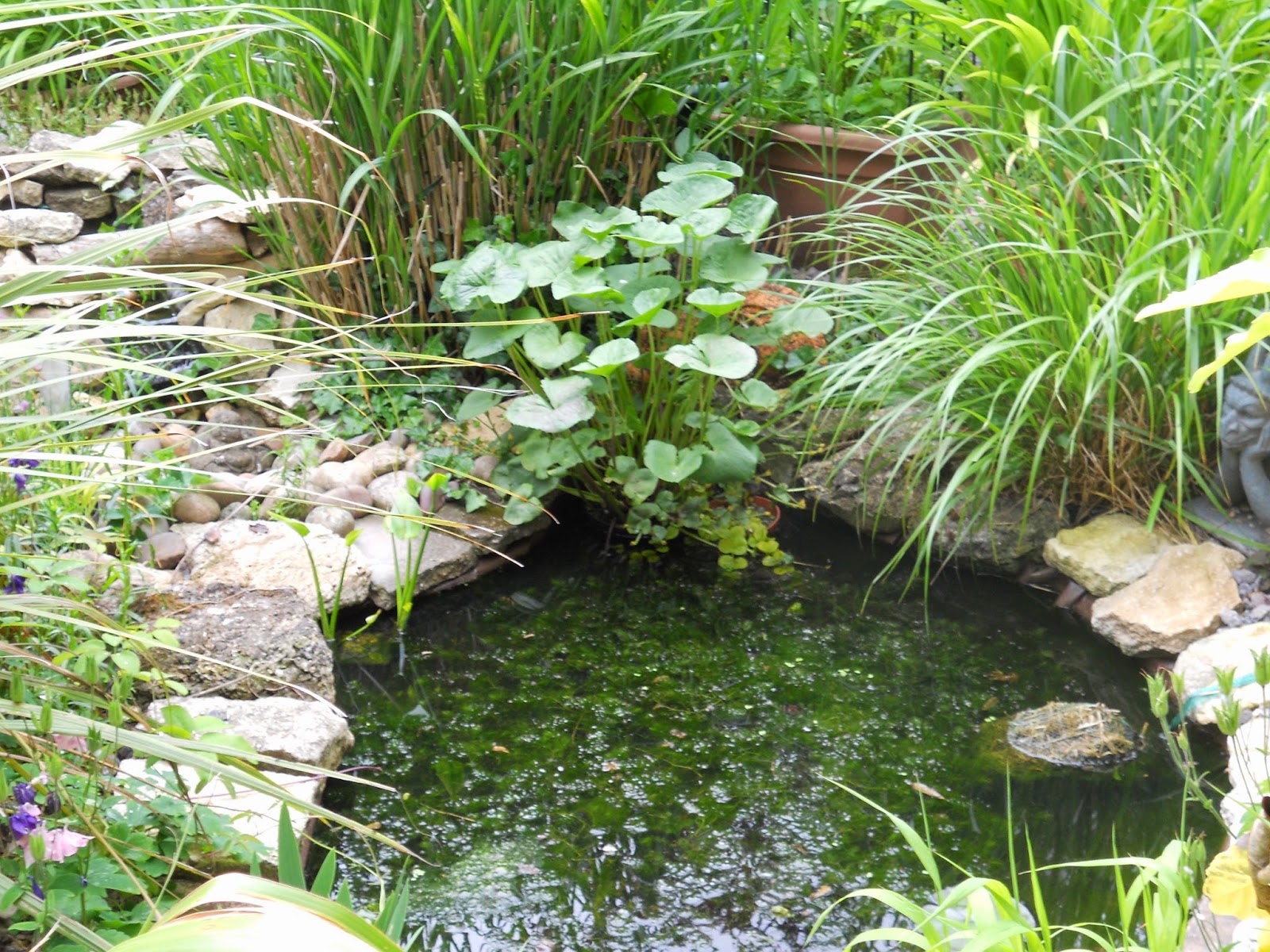 I've removed some of the duckweed from the top of the pond and now you can see a little of what is going on underneath. I find this works best with a torch at night. The frogs don't seem to notice the light but I can't help thinking of those films where a brilliant light shines down and people are abducted by aliens. Who knows, maybe the aliens are fulfilling a similar pastoral role to the one I have just conducted on Fred. 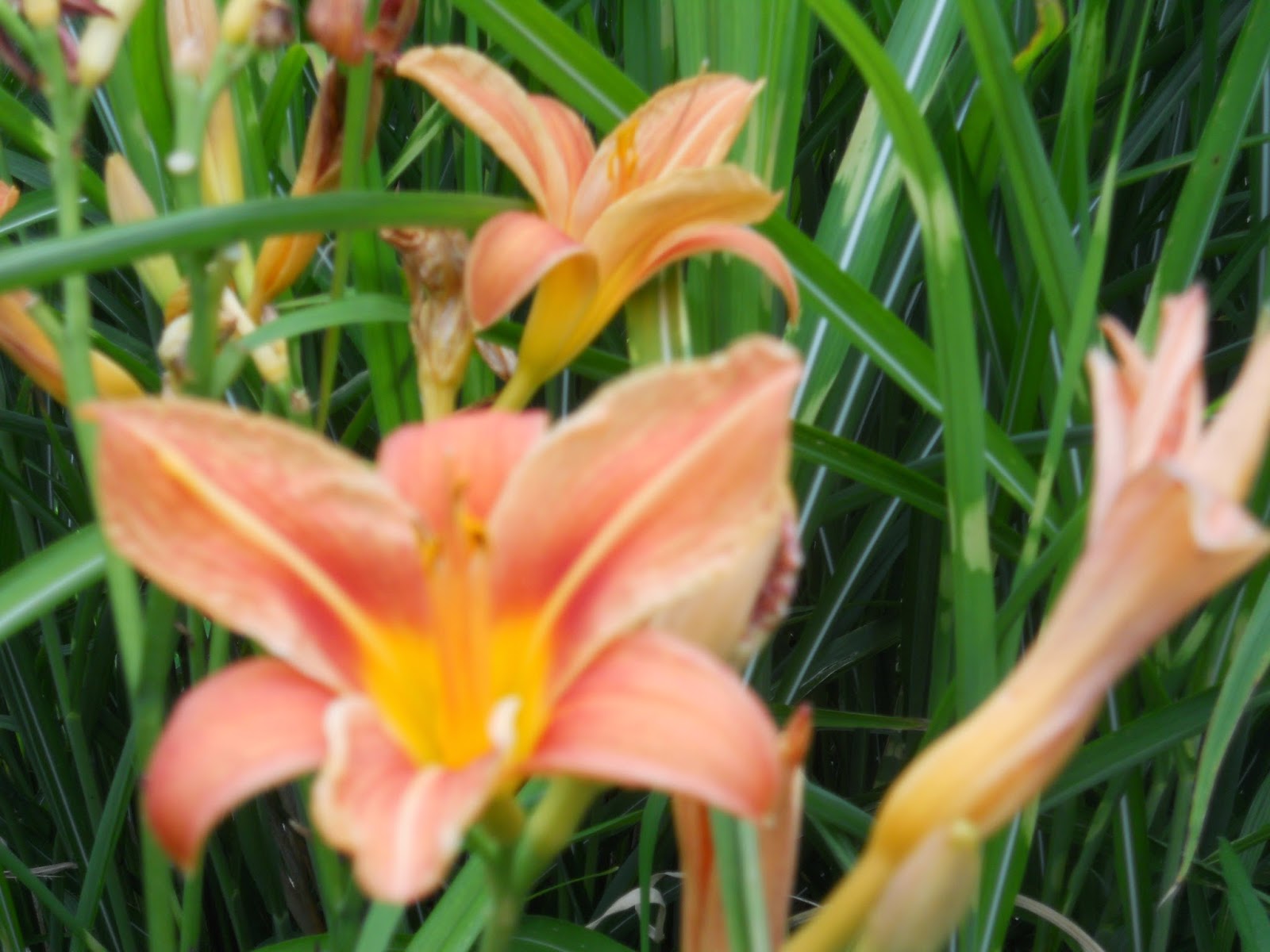 The plants in pots have been re-arranged so that the bird feeders on the beech tree I keep in a pot don't hang near anything else due to the unprecedented amount of bird poo emanating from the hordes of starlings attacking the seed and mealworms hung there. I am constantly squishing water jets on plants and garden furniture in an effort to clean the stuff off. It's the price you pay for having so many lovely birds visit your garden, I suppose. Well, that and exorbitant price of the mealworms! 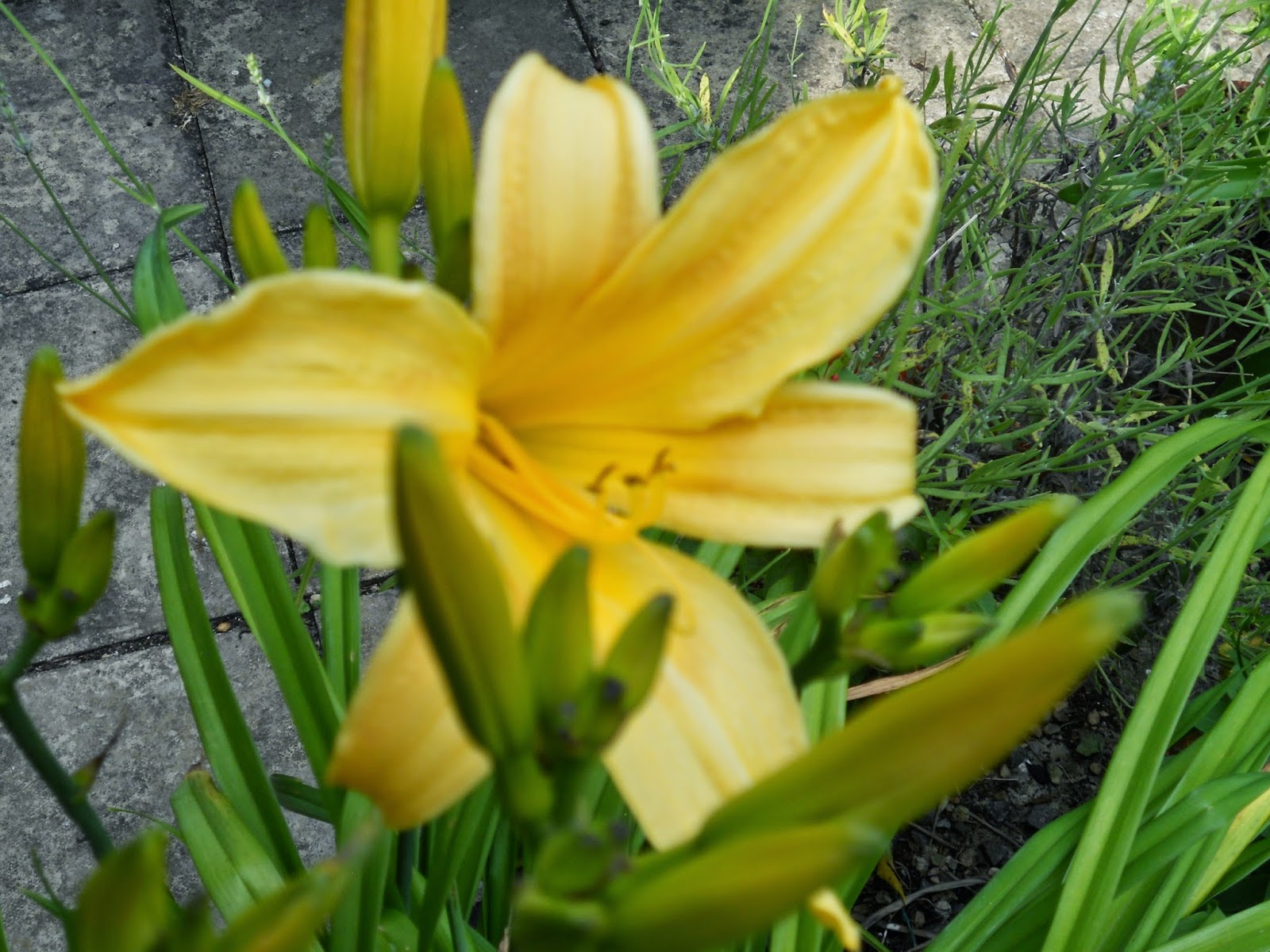 Plants seem to be flowering and going over very early this year. The orange hemerocalis has already finished although the yellow one is still going strong and the japanese anemone has strong buds ready to open soon. The hostas are more chewed than usual as I have cut down the chemicals I am using in the garden this year. I've used copper tape around some of the snail's favourite plants like the hostas and the few bedding plants I use to add some colour on gravel. I've netted the tomatoes and strawberries and placed their pots on gravel too.
Posted by judeparsons at 06:38 No comments:

The breeze has turned to wind and the sky has clouded over. Mr and Mrs Sparrow are taking advantage of the absence of the starling squad to get at the mealworms in the window feeder. 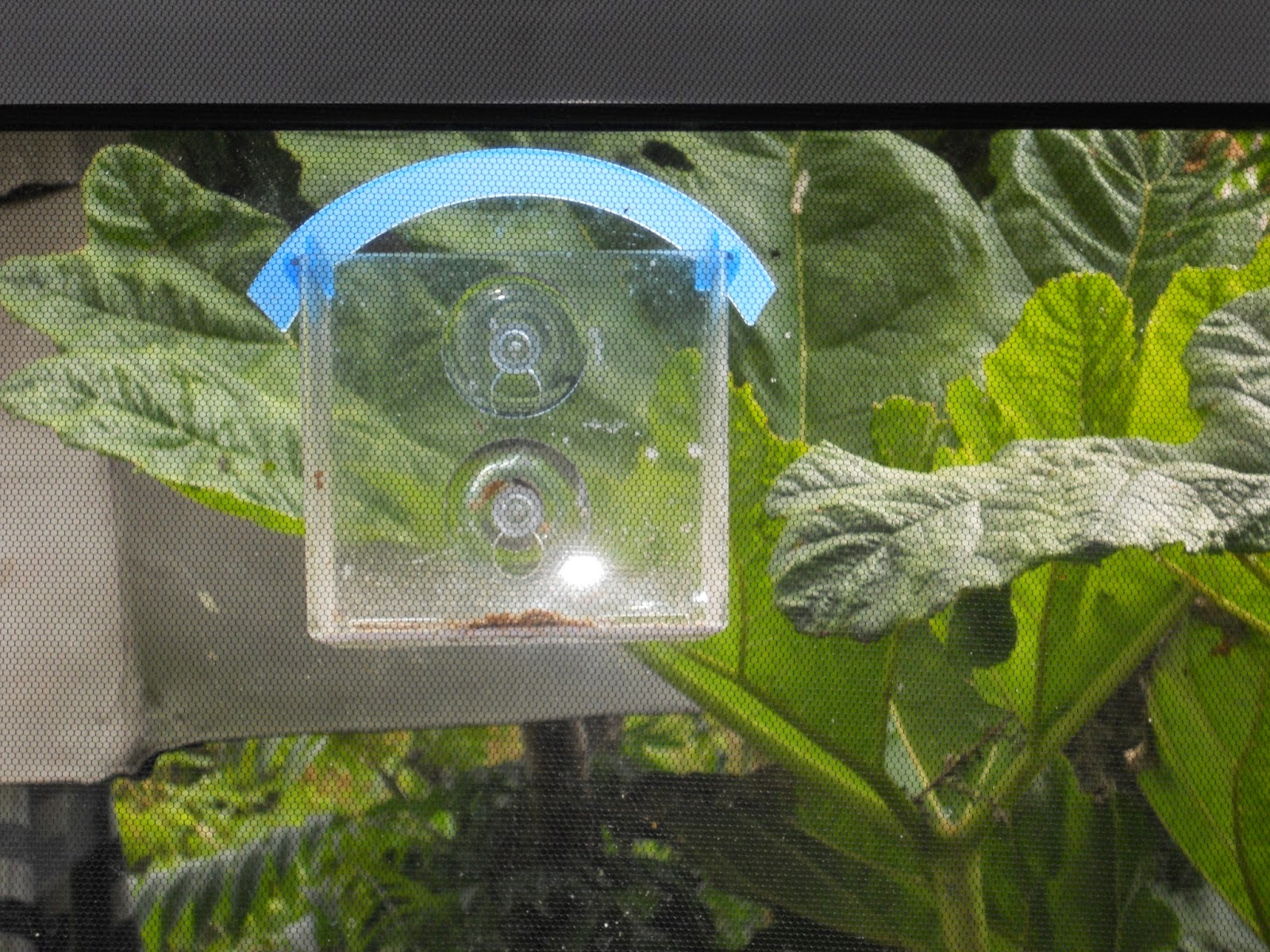 When we first put the window feeder up in the spring the only bird using it was a feisty robin diving in and quickly pinching a mealworm at a time. It took a couple of months before the sparrows caught on and started coming for supplies in the breeding season, at which point there was often a queue of sparrows and the old argumentative flutter. Since the starlings got the hang of it they are the ones most often feeding there. I can tell whether a sparrow or a starling has landed in it by the volume of the clunk without looking up. 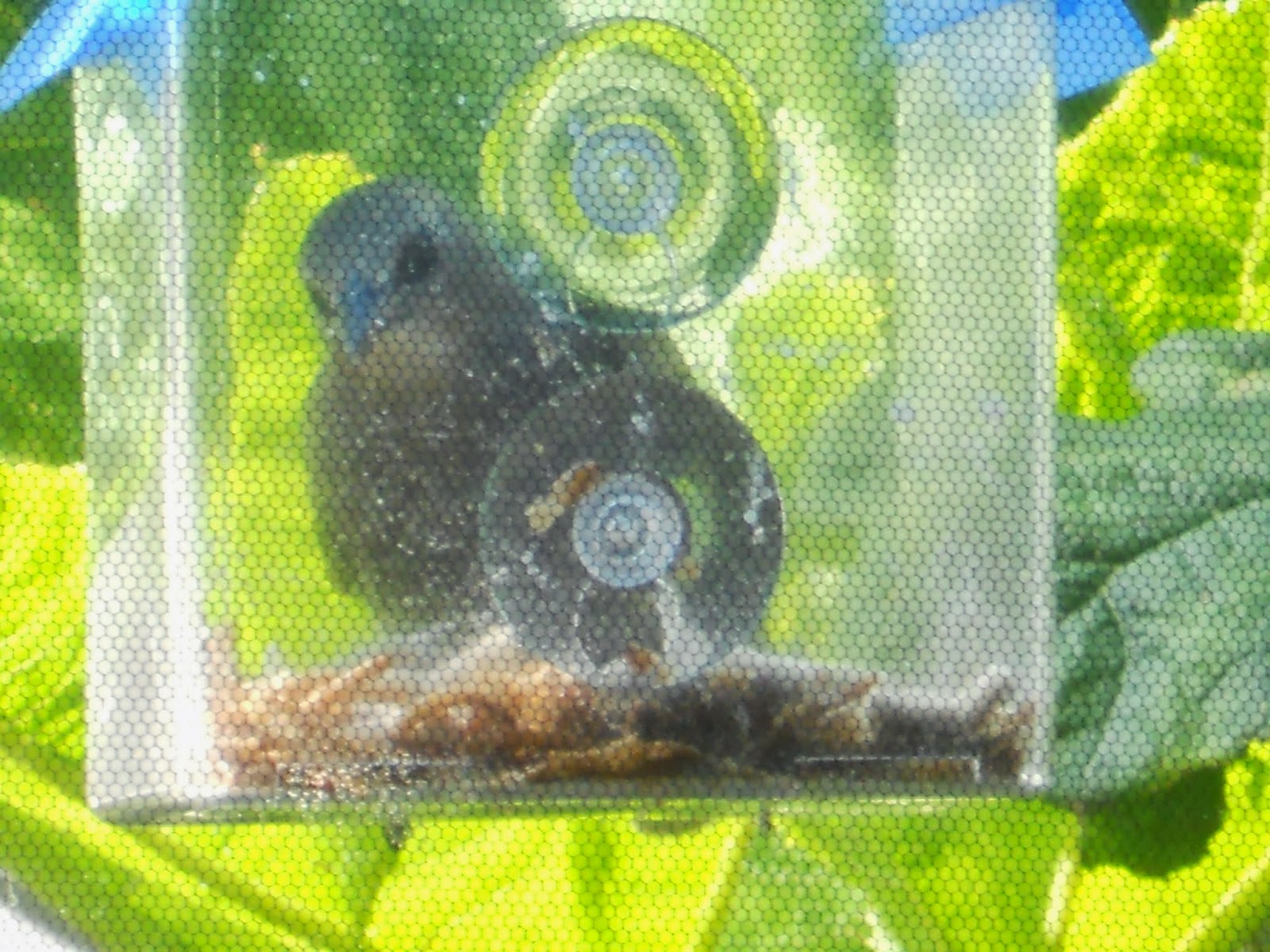 I'm quite used to them being there now and they don't mind me sitting here on my computer as long as I don't go too near the window.

It's amazing how quickly the pots dry out in this weather. I fed and watered them today. The gunnera was drooping rather sadly so it had ten minutes of water and feed. I wouldn't want to keep a gunnera if I was on a water meter. As it happens, I have two. One in a bog garden and a spare one growing in a dustbin up against the house wall just in case we have such a hard winter that the main gunnera gets killed by frost. I do cover them both  up nice and cosy before the first frosts at the end of the year.


A couple of years ago I lost the cordyline I had growing by the pond. It was at least twelve feet tall at the time and I couldn't reach it to cover the crown.

The harsh winter killed off the top and the trunk became damp and mouldy  and eventually the bark fell off. The smell of damp, rotting wood was very strong.

I was gutted when I had to cut it down but fortunately, within a few months, it had sprouted from the bottom and two of the four shoots have thrived so I now have a double trunked cordyline growing instead. It's doing very well and growing fast, probably because it already had a good root system underneath. I still have a spare one in a pot just in case, though...

Posted by judeparsons at 13:57 No comments:

The waterfall seems to have stopped leaking now. I noticed something has been knocking over the plant pots at the top of the garden with solar lights in. Cats? Hedgehogs? Clumsy pigeons? I am tempted to invest in one of those hedgehog tunnel things that mark the footsteps of whatever runs through it at night, but frankly am a bit worried about what I might discover is lurking in my garden. Not sure how I would cope with tiny little shoe prints... 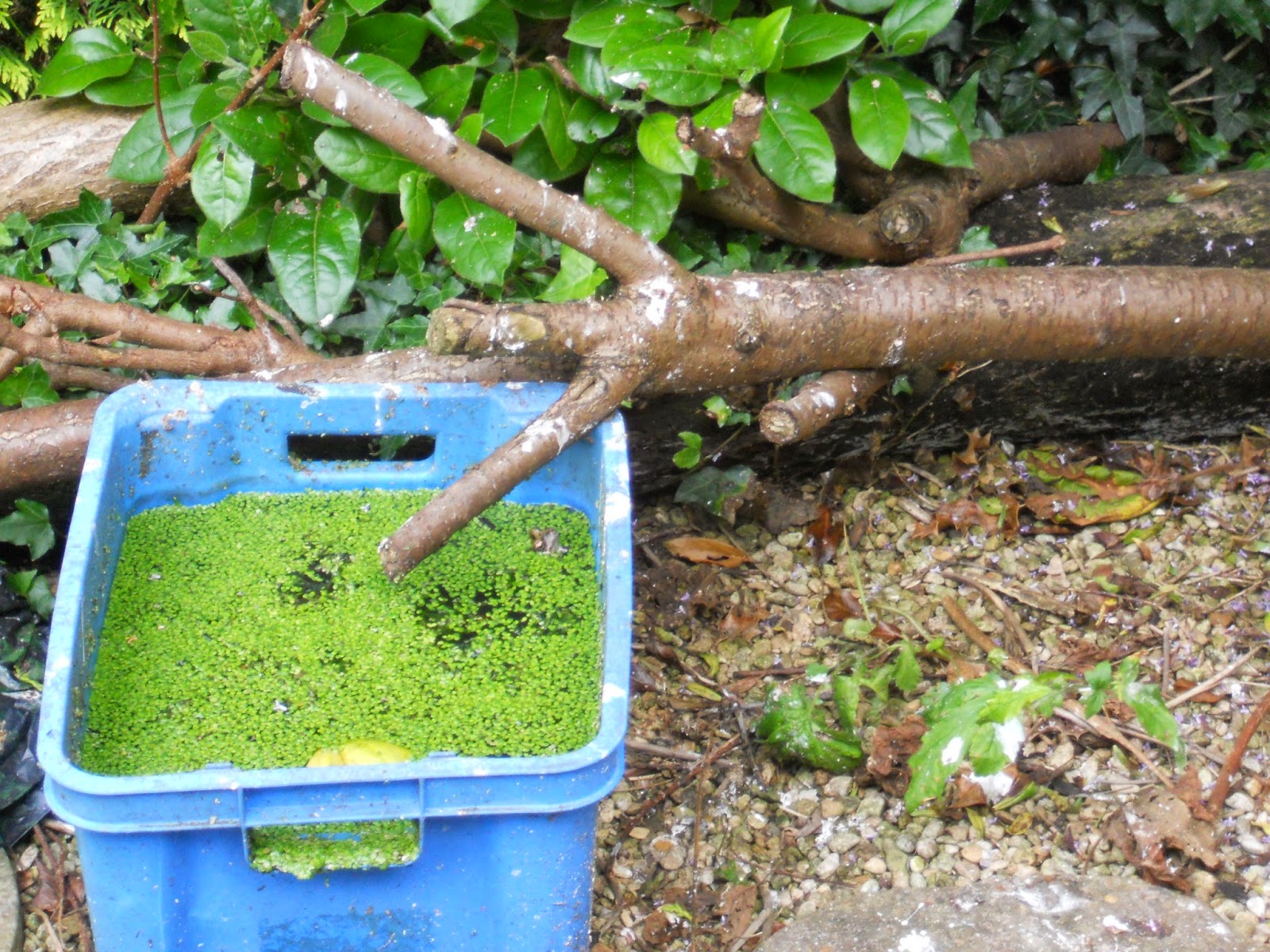 Also at the top of the garden is a blue plastic toybox that got left out and filled up with water. Fred the frog lives there all on his own. He doesn't seem to want to mix with the other frogs in the pond.

I keep it topped up so he can hop out if he ever wants but I don't think he could hop back in and so I'm pretty sure he hasn't left it for several years now. Perhaps I should ask him if he saw who knocked over the plant pots...

Posted by judeparsons at 16:10 No comments:

Lots of rain today after a few claps of thunder. Managed to get outside for half an hour, dead head some shrub blooms and tie up new delicate looking shoots of the tamarix, which I pruned last year because it had become top heavy. Not that there's anything delicate about a tamarix, even though they look it. They will survive pretty harsh treatment and conditions.


The waterfall was still leaking somewhere, despite my efforts. The outlet pipe (which is a length of watering hose) felt wet at the back when I ran my finger along it and I think perhpaps the upwards angle is causing a problem, so I've rearranged the back of the waterfall so that the pipe now comes in and points downwards. It's not so good for creating a trickling effect as the pipe is nearer the surface of the little reservoir at the top of the waterfall but without a major project that's the best I can do at the moment. If it still leaks after this, I shall have to take the waterfall apart and rebuild it, something I want to avoid doing as it's made of dry stone and it's a devil to fit them together so they look natural and still do the job properly.

The pond is still clear. The small bale of barley straw I put in there last spring is still afloat on the surface doing its job. Apparently its the heat that makes the straw decompose so that it works properly to keep algae at bay, so I've tied it in its netting to keep it at the top of the pond and weighed it down with a gargoyle.


Posted by judeparsons at 10:33 No comments:

Welcome to the Secret Garden! 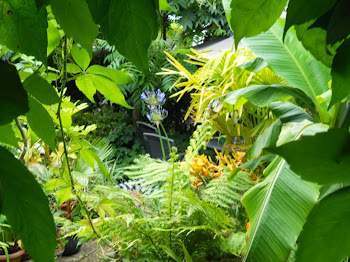 Peeking through foliage at the entrance to the secret garden